Carnavale signed an option to acquire 80% of the Ora Banda South Project which covers an area of approximately 25km2 , located 65km northwest of Kalgoorlie in the Yilgarn Craton, Western Australia.

Details of current exploration programs are described in ASX releases.

The Ora Banda region is well endowed with gold, with numerous mines to be found in the local area. The Project area is surrounded by the gold mines of Ora Banda, Siberia, Bullant, Mt Pleasant, Cashmans and Lady Bountiful, that have produced in excess of 6Moz, all within 15km of the project. (Figure 1)

The geology of the Project area is dominated by the northwest trending package of the Black Flag Group sediments and the Kurrawang Conglomerates that are intersected by the anastomosing Carnage Shear zone and associated northerly crosscutting structures. (Figure 2). The tenement package remains largely unexplored, despite being surrounded by numerous significant gold mines.

A review of existing and publicly available geophysical aeromagnetic surveys to define stratigraphic and structural target zones that have the potential to host gold mineralisation. 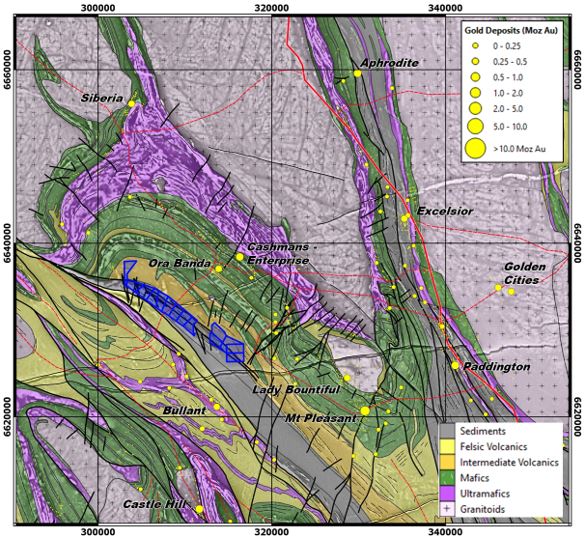 Carnavale is excited to be exploring for structural targets defined by the Carnage Shear Zone and associated structures that intersect the late basin Kurrajong sediments, that include the Black Flag Group and Kurrawang conglomerates. This setting is analogous to the geology of the +2Moz Invincible deposits, discovered by Goldfields Ltd in 2012. The late basin sediments of the Kurrajong sediments were always considered a poor gold exploration target up until Goldfields Ltd discovered the Invincible deposits near Kambalda.

Carnavale’s prospective tenement package, at Ora Banda South, extends for over 15km along the Carnage Shear Zone hosted within the late basin Kurrajong sediments. Much of the tenement package is concealed by shallow recent transported cover, which has hindered previous explorers (Figure 2).

The Project area is covered with a layer of transported material that deepens to the north and is made up of a northern and southern group of tenements separated by a gap of 2km (Figure 2). In the early 1990’s a program of auger soils was completed by Flinders Gold and Merritt Mining NL over the southern group of tenements that produced a coherent 15ppb soil anomaly over 4km of strike (Figure 3). 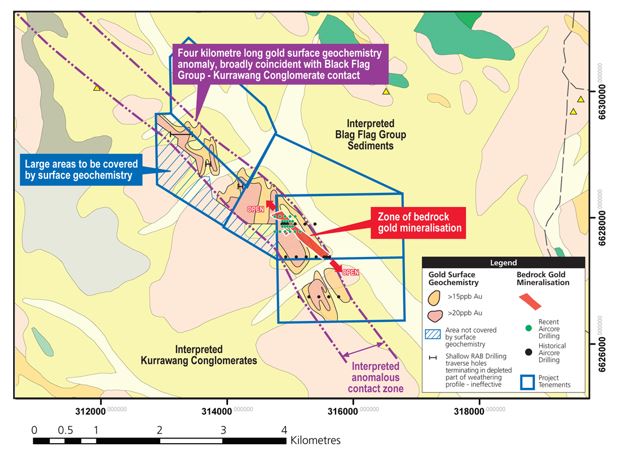 Carrick Gold Ltd completed a program of 31 aircore holes in the region between 2009-2012. Fourteen (14) of these aircore holes crossed the southern tenement package and were drilled on three traverses spaced 520m and 640m apart (Figure 6) and 80m to 160m apart on each traverse. Carrick Gold Ltd.’s program of aircore drilling returned significant results within the auger soil anomaly envelope of 5m @ 2.29g/t at the EOH in KWAC055 and 1m @ 0.68g/t in KWAC056 (for details see ASX release ‘Carnavale Bolsters Gold Portfolio with New Acquisition – Ora Banda South dated 5 October 2020”).

The most recent drilling completed at the Project was undertaken by Siburan Resources Ltd and comprised a second phase of 21 Aircore holes for 1,698m to infill the original program and test the strike extent of the bedrock anomaly (Figure 4). The holes were drilled on east-west traverses 40m to 80m apart. Drilling was to blade refusal and returned multiple plus 0.5g/t Au intersections including 14m @ 0.79g/t from 73m and 2m @ 1.56g/t from 90m to EOH in OBAC033 on the northern most traverse (Figure 4). The mineralized interval was associated with abundant pyrite and quartz veining and remains untested to the north. The mineralized zone within OBAC033 is considered significant as it confirms the presence of primary bedrock gold mineralisation in the Black Flag Group sediments within the Project. 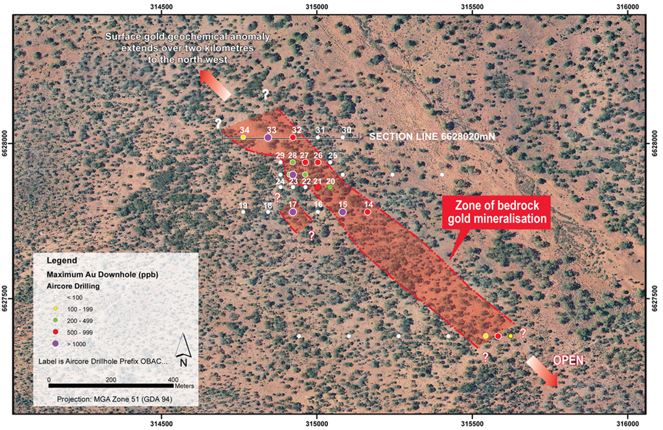 Western Resources Pty Ltd conducted a review of exploration data available within the WAMEX database for the Northern tenements and discovered that some auger geochemistry had been completed by Placer Asia Pacific in 2002 that defined a robust >30ppb Au surface anomaly that has a strike length of 1.2km and a width of 700m, peaking at 560ppb Au.

This was followed up by a limited RAB drilling program conducted by Placer Asia Pacific that was confined to the southernmost tenements of the northern group (Refer WAMEX Report A065960). Significant results included 8m @ 2.58g/t Au from 32m in OBRB096 and 4m @ 0.72g/t at EOH. Field observations of the historic RAB spoil piles suggest that the mineralisation is associated with ferruginous quartz veining.

The best gold intersections were identified on a drill traverse that was orientated north-south, suggesting mineralisation is associated with structures trending ENE-WSW. This is comparable to the mineralised structures identified at the Ora Banda deposit located 8km to the northeast. 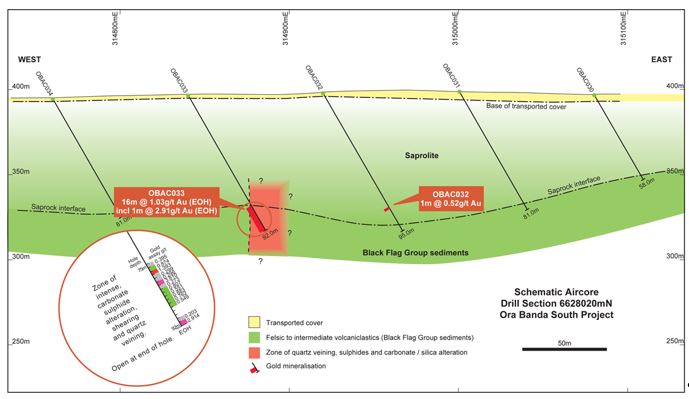