Carnavale owns 100% of the Grey Dam Ni-Co Project (“Project”), located near Kurnalpi approximately 90km northeast of Kalgoorlie, West Australia. The project is considered prospective for nickel sulphide, kambalda style mineralisation. The tenement package also hosts a shallow laterite Ni-Co resource as well as structurally controlled gold anomalies. In November 2019, Carnavale added to their existing tenement package by securing the right to acquire up to 80% of the adjacent tenement portfolio held by Mithril Resources Ltd (ASX:MTH). The expanded Grey Dam Project now covers 108km2 of prospective and contiguous tenure that hosts 30km of bedrock ultramafic/mafic sequences that have a strong potential for high grade, nickel sulphide, komatiite style mineralisation. Details of this transaction were released to the ASX on 11th November 2019. 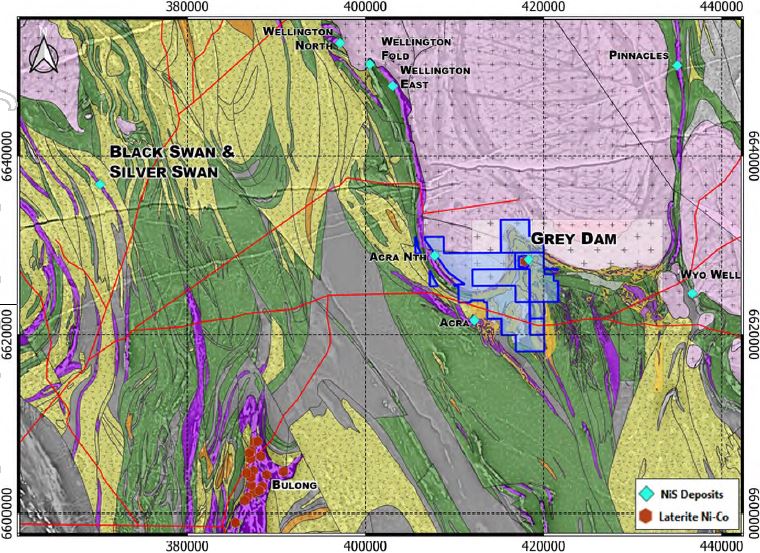 NIckel sulphide mineralsisation is well known in the region with the nearby Black Swan and Silver Swan nickel mines, 50km to the west, and other deposits/mineralisation defined at Wellington, Acra and Wyo Well. The host sequence at Black Swan is considered comparable to the two host ultra mafic sequences (A and B) at the Grey Dam project.

A detailed review of all the previous exploration was completed across the extended project area and defined two prospective ultramafic sequences that have demonstrated evidence of nickel sulphide mineralsation along strike and has highlighted anomalous exploration targets from existing data. Previous drilling has demonstrated that the ultramafic sequence hosts sulphide rich nickel mineralsation with associated copper and PGE anomalies. 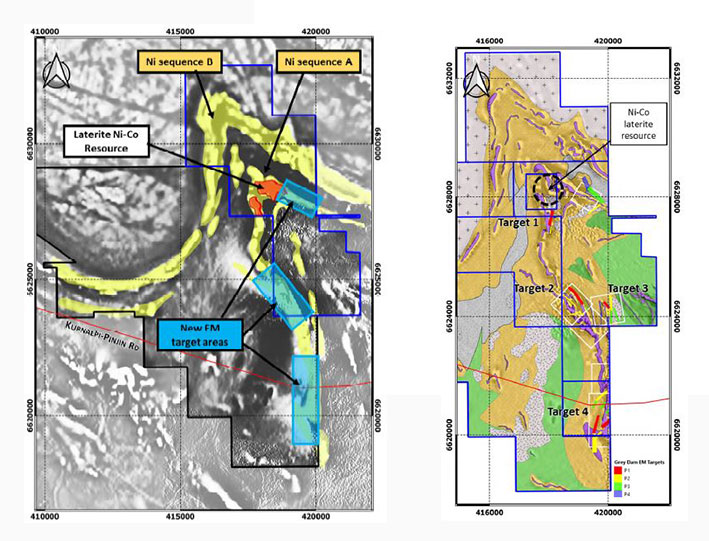 Four very strong, high priority, target areas have been defined along nickel sequence A where ground FLEM geophysical surveys have been completed. These targets are anomalous for Ni-Cu-Co-PGEs in previous drilling and positive examples of disseminated sulphide rich mineralisation exist within the sequence along strike

The EM surveys completed in Q1 2020 have defined 4 very strong conductors that present as direct drill targets. Limited past exploration has been undertaken on nickel sequence B within the project area. This sequence is known to host sulphide style mineralsation along strike. An initial program of ultrafine fraction (UFF) soil sampling has been completed to test this sequence, in order to prioritise targets for subsequent EM surveys. UFF sampling chemistry is a new technique aimed at detecting nickel mineralsation under cover. This is being trialled by Carnavale at Grey Dam in association with CSIRO. The phase 1 UFF program was succesful in identifying the geology below transported cover and as a result Carnavale has a second phase of UFF planned for Ni Sequence B .

The Project has a Ni-Co 2012 JORC Mineral Resource, defined in 2019 by Carnavale after positive drill results received from the July 2018 infill, extensional RC drilling programme.

In July 2018 Carnavale completed an RC drilling programme that confirmed significant and shallow laterite Ni and Co mineralisation. The RC drilling has demonstrated a strong Ni domain up to 40m thick from surface. Internal to this Ni domain, higher grade Ni (>1.0% Ni) forms a consistent and strong horizon throughout most of the deposit. Overlapping this high-grade Ni domain, is a distinct Co rich domain similarly commencing from near surface to a maximum depth of approximately 30m. The Ni-Co mineralisation is hosted within the highly weathered laterite profile with the bulk of the mineralisation hosted in the upper saprolite and soft clay portion of the profile. The potential for a shallow low strip ratio open pit is considered favourable subject to a suitable extraction process being evaluated.

The previous resource area (yellow area) highlights the Carnavale infill RC drill hole locations and limit of anomalous Ni and Co mineralisation. The drilling has successfully extended mineralisation in specific areas which may provide an incremental increase in resources. More importantly, the Carnavale drilling provides greater definition of the internal high-grade Ni and Co horizons and provides the opportunity for increased definition of the discrete horizon. 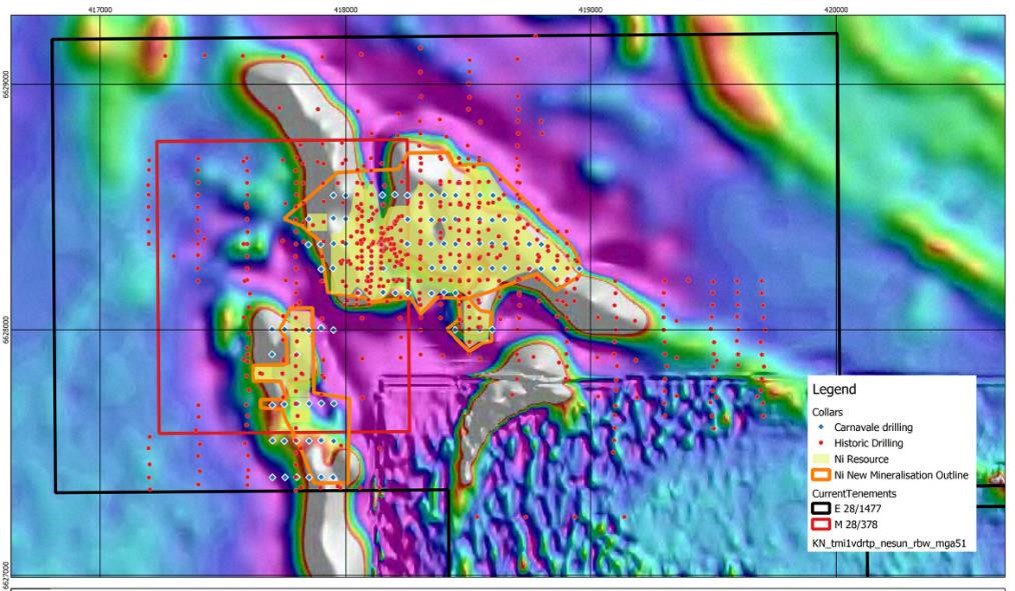